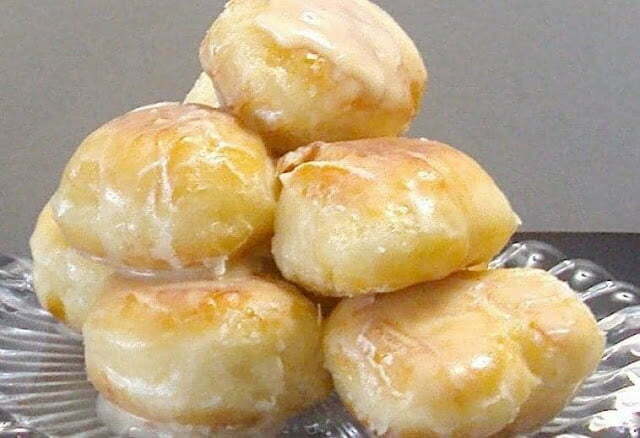 ingredients :
+Glaze:
Directions  :
The first step:
Using a large measuring cup, mix the milk and boiling water. Dissolve one teaspoon of granulated sugar in the water, then add the yeast. Gently stir.
Put it in a warm place to activate the yeast. When it foams, it is activated
The second step:
In a large bowl, mix flour with remaining sugar and salt.
Cut the butter with a pastry cutter until it resembles crumbs
Beat the eggs well and add to the bowl with the yeast mixture
Third step:
Blend the mixture until you get a smooth paste, this will be about five minutes of mixing
On a lightly floured surface, place the dough and start kneading for five to ten minutes.
The dough should be soft to the touch and have small bubbles forming under the surface
The fourth step:
Put the dough back into the bowl and cover it with a cloth. Let it rise until it doubles in size. This will take an hour
Return the dough to a floured surface and cut into 4 pieces. Roll out the dough until it is an inch thick.
Fifth step:
Using a donut cutter, cut out donuts and place them on a parchment-lined sheet. Once you remove the donut hole, put it on a separate plate
Cover the cut cakes with a cloth to allow them to rise while the ghee is melting and heating
Gently put each donut ring in the oil and fry until brown, flip and fry the other side.
Sixth step:
Remove from oil and place on a rack to be glazed
Repeat the process of frying the donut holes
Mix the glaze ingredients and gently pour over the warm cakes.
This should be done while it is still warm to get a crisp, glass-like effect on the glaze.
Enjoy !
Likes:
0 0
Views:
26
Article Categories:
recipes
ADVERTISEMENT