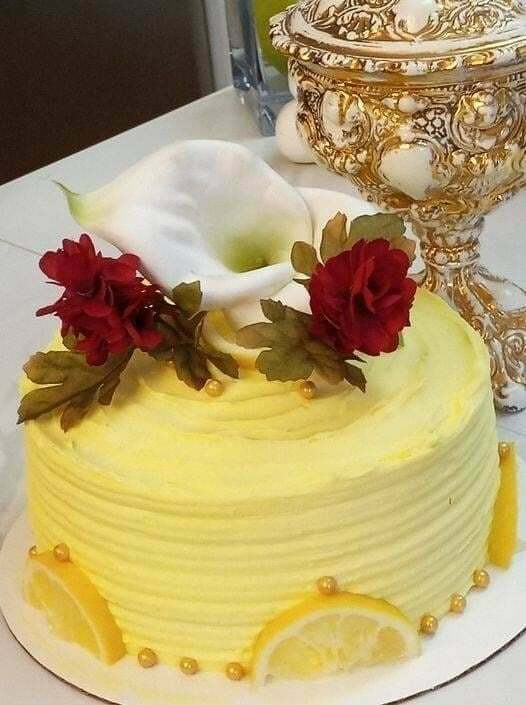 FOR THE LEMON CAKE, I USED:

AND TO MAKE THE LEMON CREAM CHEESE FROSTING:

The oven should be preheated at three hundred fifty degrees Fahrenheit, with a wire rack in the middle of the oven, and I greased and floured two eight-inch round cake pans, and lined them with parchment paper, I greased the parchment paper as well with unsalted butter, and set them aside.

After that, I sifted all together; the cake flour, baking powder, and salt in a medium-sized mixing basin.

In a medium-sized mixing basin or large measuring cup, I whisked together the buttermilk and egg whites until well blended.

In the bowl of a standing mixer or a large mixing basin, I combined the granulated sugar with lemon zest and rub them together with your hands until the sugar was sticky and fresh.

At this step, I added the butter and continued to beat on medium speed for 3 minutes, until the mixture was light and airy.

Then, I whisked together the lemon extract, And using a medium-speed mixer, I added one-third of the flour mixture, followed by half of the egg/buttermilk combination, and beat until well-incorporated.

Still on medium speed, I added the next third of the dry ingredients, followed by the remaining eggs/buttermilk.

And I continued to beat until smooth, mixing until the batter was smooth, then I added the other dry ingredients and mixed again until well combined.

Following that, I added an additional two minutes on medium speed, beating constantly, to make sure the batter was well incorporated and that enough air has been pounded into it.

And I used a rubber spatula or an offset spatula to smooth the tops of the cakes once they have been divided equally.

The next step, was baking for thirty to thirty five minutes until the cakes fully rise, spring back softly when pressed, and a tiny knife inserted into the middle comes out clean.

I placed the cake pans on a wire rack and let them cool for five minutes before removing them from the pans to cool completely.

The Frosting; To make the cream cheese and butter-smooth, use a stand mixer equipped with a paddle attachment and beat on medium speed for approximately three minutes, or until there are no lumps left.

Then you can frost your cake, spreading the frosting down around all the sides, and use the decoration you prefer for this lemon cake.