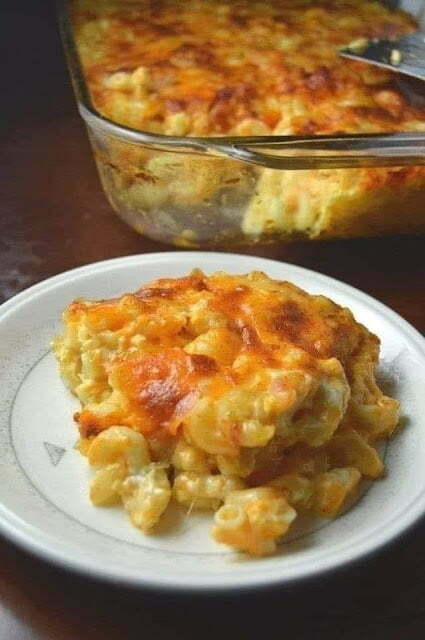 Ingredients
Instructions
Cook the pasta in a large pot of water following the package recommendations for aldent cooking and removing 1 minute from the cooking time (the pasta will continue to cook in the oven).
mac and cheese recipe
Drain the pasta and place it in a large bowl with a drizzle of olive oil (to prevent it from sticking). Mix well to distribute the oil.
mac and cheese recipe
Preheat the oven to one hundred eighty .
to preheat the oven
Meanwhile, grate the cheddar and the Gruyère and place them in a salad bowl, mixing the two cheeses well.
Mix milk and cream in a bowl. In a large saucepan, melt the butter (previously cut into pieces). When is melted, adding flour and stirring constantly with a whisk. The mixture should thicken well.
Then add the cream/milk mixture little by little, allowing the preparation to thicken between each addition. Season well with salt and pepper. Lower the heat.
Take a good handful of cheese from the bowl containing the mixture of the two cheeses and set aside. It will be sprinkled on the gratin just before putting it in the oven. Pour the rest of the cheese into the pan containing the béchamel and mix well until the cheese has completely melted. The preparation will be very thick. Stop the fire.
cheese bechamel
Pour the béchamel/cheese mixture into the large bowl containing the pasta and stir until the pasta is all well soaked in the cheese cream.
mac and cheese recipe
Pour the cheese pasta into a large buttered gratin dish. Sprinkle with the remaining cheese. Bake at one hundred eighty ° for fifteen to twenty five minutes (depending on whether you want to have a well-grilled gratin on top or not). Enjoy immediately!
mac and cheese in the oven
Enjoy !
Likes:
0 0
Views:
14
Article Categories:
recipes
ADVERTISEMENT