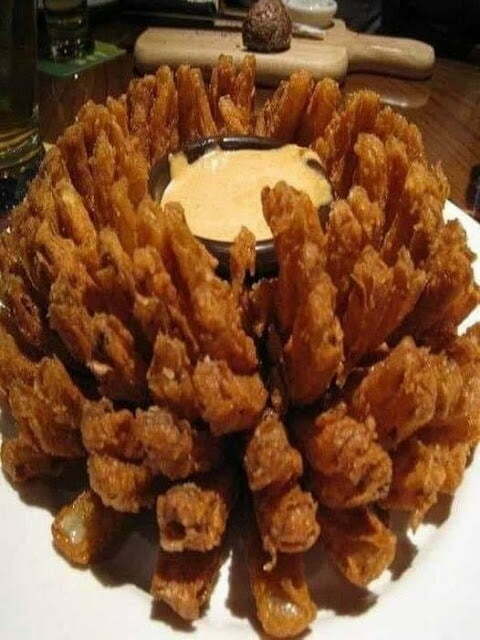 Ingredients :
+Seasoned flour:
Beat egg into milk in a bowl enough to hold onion.
In another bowl, combine the flour, salt, peppers, paprika, oregano, thyme and cumin.
Now it’s time to slice the onion (the riskiest part of the operation).
First cutting 3/4 i
nch to one inch from top and bottom of onion. Removing parchment skin.
Using a sharp knife, cut 1 inch in diameter from the core of the onion.
Now, using a large, very sharp knife, slice the onion several times down from the center almost all the way down to create the “petals”.
The first slice from the center of the onion should be 3/4 cut, turn the onion ninety° and slice again to make an X through the first slice.
Separate halves sections very carefully, until onion is sliced ​​sixteen times.
Do not cut all the way to the bottom.
The last 8 slices will be a little disheveled, but your onion doesn’t have to look perfectly like a flower. It will still taste good.
The sections of the onion tend to stick together and you need to separate them well to coat them more easily.
To help you separate the “petals, immerse the onion in boiling water for oneminute and put in cold water.
Dip the onion in the milk and egg mixture and generously dip in the seasoned flour.
Once assured that the onion is well coated, dip again in the egg and milk mixture. Dipping twice in the mixture ensures that you have a well-coated onion and prevents the breading from falling apart when frying.
Let the onion rest for fifteen minutes in the refrigerator until the oil is ready.
Heat the oil to threee hundred fifty °F in a saucepan or deep fryer.
There should be enough oil to completely cover the onion when frying.
Fry the onion top side up for ten minutes or until golden brown.
When the onion is golden, remove from the oil and drain on a wire rack or paper towel.
Open the onion deeper from the center.
You can put a little dipping sauce in the center.
You can also use plain ketchup.
+Flowering Onion Dipping Sauce
Mix all the ingredients well in a small bowl, cover and cool well before serving.
Enjoy !
Likes:
0 0
Views:
40
Article Categories:
recipes
ADVERTISEMENT