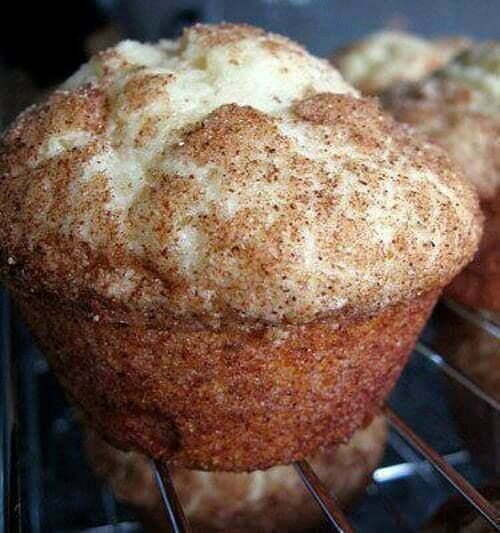 Ingredients
For the muffins:
For garnish :
How to prepare
The muffin
Step one :
Preheat the oven to three hundred seventy five  degrees and generously grease a standard muffin pan with nonstick cooking spray, then set aside
step two:
Add the butter and granulated sugar to a large mixing bowl and mix for about two minutes until the mixture is smooth and well combined. Then add the egg, vanilla, milk and sour cream and mix until combined.
Step three:
To the butter mixture, add the flour, baking powder, baking soda, cinnamon and salt. Use a rubber spatula to fold until it combines. Be careful not to over mix
Step four:
Spoon batter into greased muffin pan, filling each pan to about ⅔ of its volume.
Step five:
Transfering muffin pan to the preheated oven & bake for about twenty five min
Step sic:
After baking, let the muffins cool in the muffin pan for one to two minutes, then place them on a cooling rack.
The garnish:
Step seven:
Melt the butter for the filling in a small container. Meanwhile, mix the granulated sugar and cinnamon in another container.
Step eight:
Once the muffins are out of the oven and cooled for a few minutes, brush each muffin with a thin layer of melted butter using a pastry brush.
Step nine :
Sprinkle the cinnamon-sugar mixture generously over the butter layer
. Serve hot and enjoy!
Likes:
0 0
Views:
29
Article Categories:
recipes
ADVERTISEMENT